[ENG]
In the interactive performance “Refugee on Trial: Afghan Journalist Ali J. vs. Netherlands”, the asylum-seeker Ali J. appeals to the court. His asylum application has been rejected by the IND (Dutch Immigration and Naturalization Service), which finds his asylum application unbelievable and inconsistent. Yet Ali J. states that he is actually threatened by the Taliban. This performance is based on an actual asylum case, and involves the public in the process. The piece, directed by Ehsan Fardjadniya, invites the public to think critically about the “refugee” label. What is needed to be recognized as a refugee, and who decides on that?

[Eng]
On November 26, 2019 in Pakhuis de Zwijger, the first trial performance will take place in which practicing asylum lawyers, together with a asylum judge, will question Ali J. about his persecution story. Ali claims to have been present as a journalist in a successful attempt by the Taliban to steal expensive equipment from his American colleague. He came into the sight of the terror group and after a narrowly successful escape he decided that his life in Afghanistan is no longer safe. However, the IND finds his story unbelievable and inconsistent. The audience present may ask Ali questions and will have to ultimately decide on his future.

[Eng] Contributors to this performance are:

Mogelijk gemaakt door / Made possible by

Dr Strangefolks is a performance piece that aims at penetrating a colonial and non democratic institution where fate of many lives were decided.
“They are not only ruling over our fate, but also deciding our ways of life, for example what we are going to eat, how we should dress or when we should call our mothers…” chirped the non-fascist bird.
Walls, instruments of control, are mostly build by paranoid heterosexual male to stop penetrations of strange bodies in the feminised nationhood. This paranoid authoritarian subject perceive his body under constant penetration threat of dangerous and foreign objects.

With temporary penetration method Dr Strangefolks performance infiltrate into the first colonial museum in the world: the Dutch Royal Tropical Institute. Acting as a business entity we rent the institute for a conference knowing that artistic performance would not be tolerated or face the gate keepers.

Dr Stangefolks performance is committed to the development of temporary, imaginative, anti-colonial and feminist futures to come after the end of life due to upcoming climate change catastrophe in the next 12 years. Variety of participatory performance score are at play but one the most important moment towards achieving that imagination is when everyone present at the event is able to share their agenda’s and demands before end of life as we know it.

We voice those demands loudly to vibrate the colonial architecture and penetrate through its walls, demanding non-normative, strange and anti-patriarchal bodies and voices to replace the white heterosexual paranoid man cluster in the ‘war room’* conference table.

In honour to ancestors like Ana Mendieta, Marielle Franco and so many females that couldn’t finish their works.

*War room refers to a scene in a cold war movie Dr Stangelove (Stanley Kubrick1964) where white heterosexual men dominate a large conference table in the war room to decide the fate of humanity when the soviet Doomsday is triggered. Modern and contemporary versions of similar events would be Berlin Conferences (1884–85), Sykes-Picot Arrangement, Heeren XVII (the Lords Seventeen) or G8, G20, etc.

Production of the day by Monica Sharon

Language: English
Tickets at the door for 8€. For those who can not afford it any donation is welcome.

12 Year Before End of Life and Your Demands

Outsider with a Delivery

To see the full text and documentation of this project please ask for the password by emailing to ehsanfardjadniya[at]gmail[dot]come.

Concept: ‘Power and Gender’ performance lab in Iran
Format: 5 days labratory, one presentation.
Laboratory format: Sharing and learning from each other’s idea and practice in relation to the concept. Working toward a collective piece for a presentation in the end of the laboratory.
When: End of July, beginning of August.
Where: Bon-Gah No.7, Zanbagh St., Keresht, Tehran-Pardis Hwy.
For Whom: For invited performance artists only.

Proposal for a performative lab about ‘Power and Gender’: Practices and trainings to counter repression and oppression.
Understanding the oppressors subjectivity and physicality: How does authority create subjectivities and physical practices to exercise their power? How do they personify and become the agent of state power in the moments of giving commands and choreographing civilians, consequenting in fines, arrestments and deaths?
The exercises are performed in a studio so as to study and scrutinize how these operations are created.

During the lab we like to focus on the issue of gender in power relations: For this project the counter-training will focus on structuring / inventing gender through social performances of bio-power in public and private spaces that perpetuate the male / female binarity. Harassment, for example, more than a violent expression of desire, is in fact a social message given by patriarchy that presents a dangerous world for women who are then persuaded to remain in the very condition of domination to survive, respecting by fear gender hierarchy and never challenging those who speak for them and who directly influence their choices. The technologies analyzed here will be silencing policy and sexual harassment that operate so that women and members of LGBTQI community can’t denounce their harassers and are always in doubt about the legitimacy of their suffering since gender violence is socially normalized in the most part of the world.

Definition of what is a lab:

In this article you can read about the concept of “Hinterland” installation in “Post-Peace” exhibition at Wuttembergischen Kunstverein Stuttgart. In this post you can also see two related performances.

“Stage for Tragedy” is originally the title of Alexandra Exter’s 1924 stage design drawing for a tragic scene in a film. It depicts a global labyrinth as a system of segregation and exclusion that causes disorientation, vertigo and fear at home or while trespassing national boarders. At the same time, Exter’s stage is a mental space governed by rigorous, yet fracturing, disciplines of how to behave and where to go. To translate the “Stage of Tragedy” to the contemporary, I appropriated the design of an ammunition box and used it as a basic element to construct the stage. The wood was sourced from second-hand pallets purchased in Stuttgart. The work alludes to the on-going free travel of goods and borderless exportation of death by the German and Western European weapon industries. The stage will function as a collaborative performance space that can be transformed into a variety of shapes according to the needs of each performance group

With special thanks to Andrés Novo assistance in deisgn and architectural adaptation.

A performative building up of ammunition boxes for the ‘Hinterland’ installation. I deconstruct Euro-pallets and transform it to boxes in style of ammunition boxe for duration of five weeks, more than nine hours of daily wolr with only one Sunday break.

Making of ‘Hinterland’ from Ehsan Fardjadniya on Vimeo.

Hinterland is a place between two lands
It isn’t the mainland, it isn’t my motherland

They say it is a port of fabrication, with no shine in its sand
You should leave from it, as far as you can

I want to reach, what they showed me as heartland
Not this euro-pallet and plastic, shantyland

Hinterland isn’t Netherland, Deutschland, Finland or Switzerland,
Nor is ausland in or outside the motherland
…
I got a new occupation in this new portland
I build ammunition boxes for the homeland
They say it wouldn’t be used in your fatherland
The money will go to art and culture on one hand
And some for sick baby grant, on the other hand

I don’t know, maybe it is for those who we strand
One day on this, not light but dark dark volcanic sand

2. Performance ‘Where is Stammheim?’, 14th February:

Where is Stammheim (1)? Or where is Stamm Heim (2)? Where is home? Where is the prison? Where is exile? Are you home in exile? Can you feel home in prison? Can prison become home? Does a shelter, a place to refugee still exist? Where are the boarders of prison? How can you escape that prison? And where would you go after crossing the boarders of that prison? The last question reminds me of the moment when Truman touches the walls horizon in the end of the sea. 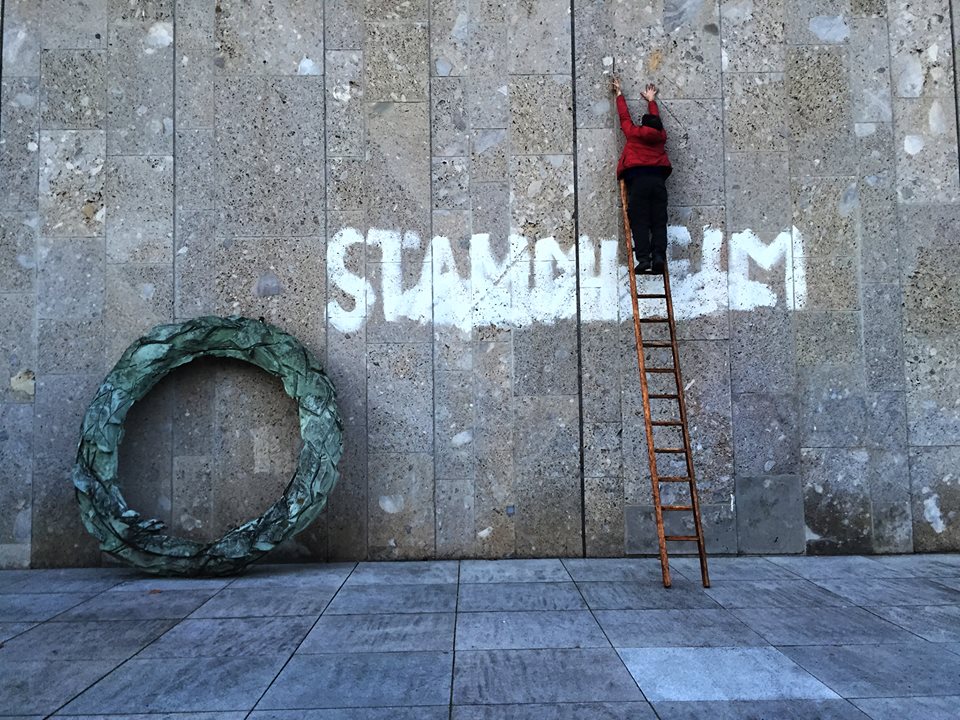 Performance ‘Where is Stammheim?’ with work of Olaf Metzel in the garden of Wuttembergischen Kunstverein Stuttgart.

3. ‘I Must Seek Refuge Again‘, 24th February at the opening of ‘Post-Peace’ exhibition:

Ongoing performance during the opening of Post-Peace exhibition entitled: ‘I Must Seek Refuge Again‘. A durational performance in the close confinement of one boxes for time span of seven hours.
About:
The performance was not announce to the public but only communicated with few people so that it would become a secrete information or roamer.
The end of the performance happened by intervention of Anna Dasovic, one of the artist in the show. She repeatedly insisted that i should stop, end the performance and come out of the box. A that moment i thought actually this is a very sincere and humane request. During my performance i was actually thinking why no one comes to save me? In some snooze moments in the box i actually was dreaming that people at the opening and artists whom would know will come and save me out of the box. The longer it took the more disappointed i become about my possible saviours.

‘Ammunitionboxing’ inspired by ‘Soapboxing’, which is a improvisational political talk in public space. This performance took place at Schlossplaz outisde the Wuttembergishe Kunstverein Stuttgart at the second conference day of Post-Peace exhibition. I invited the public to take a box from the installation and take it outside the white-box to the main square where i held my soapboxing speech